Your sleep cycle. Your mood. Related?

Sleep is one of the most important factors for health and wellbeing. It helps your body recharge each day. When you don’t get enough, it can significantly impact your mood, energy, concentration, memory, appetite, metabolism and hormones. Sleep matters!

I often talk about sleep in clinic and you may have noticed that I often reference it as a therapeutic tool when discussing a number of different health conditions on this blog. I’ve also written about the importance of sleep hygiene for cultivating better sleep.

So we’ve established that getting sleep is important, but what about when you sleep?

Does your sleep cycle affect your mood and behaviour?

An interesting study was published this month, looking at the behavioural differences between people who go to sleep early and those who stay up late. Sleep chronotypes describe your preference for rising early or staying up late – the time during which your body functions best. Early risers are morning sleep chronotypes and stay-up-late folk are evening sleep chronotypes.

What the researchers found was that those individuals who identified as evening sleep chronotypes were more likely to exhibit personality and behavioural traits associated with the ‘Dark Triad’ (i.e. narcissism, psychopathy, and Machiavellianism).

My favourite quote in this paper, which is also the final line, is an absolute humdinger: “In short, those high on the Dark Triad traits like many other predators (e.g., lions, African hunting dogs, scorpions), are creatures of the night.” Creatures of the night! Take THAT night owls! Or should I say… night scorpions?

All jokes aside, this does highlight an interesting correlation between those who go to bed late and a number of unhealthy physical and emotional outcomes. However, is that what makes you stay up late (you creature of the night!) or are the negative health outcomes a result of irregular sleep patterns and an imbalanced circadian rhythm? I’d like to think the latter. Which means, by cultivating healthier habits and resetting your sleep clock (even marginally), you will be more in sync with the world around you and less likely to display those negative attributes you’ve been otherwise assigned. 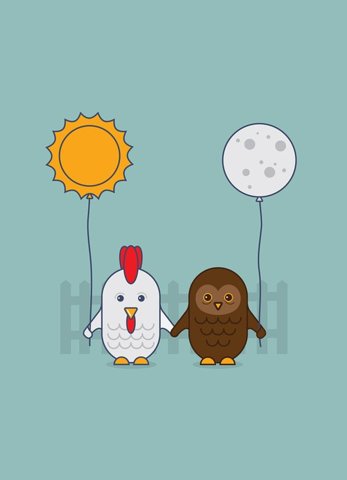 Are you an early bird? A night owl? Do you reckon it impacts your health?